I made a decision to start writing regularly a couple of months ago.

The first month was a breeze. High levels of motivation. The excitement of launching my own blog. It was hard not to write.

The excitement dissipated after a few weeks, but I was largely able to retain the momentum.

Then it got harder. My self-doubts became were more frequent. I showed up a bit less. I struggled more. Much less excitement. More boredom.

And now I feel like I’m at the bottom of a slippery slope.

It’s tempting to quit now. Should I or should I not?

This is not an unusual pattern. It happens to many of us every time we embark on a new project.

To understand what’s going on, let’s break this down into 4 phases.

Phase 1: We’re like a river gushing down from the mountains. We’re full of verve and enthusiasm at the beginning of the journey.

It’s hard not to show up often and ship your work. Even you can’t stop yourself from moving forward. You’re in your peak creative state. Full of ideas along with the energy to execute them.

We’re delighted with our productivity and output.

Phase 2: There’s a bit less enthusiasm. We don’t feel the tailwind of excitement as much. And we’re having to rely a bit more on self-discipline to show up every day.

“Perhaps just this once I can skip showing up?”

We start hearing whispers from some corners of our minds.

Thankfully though, the momentum we’d built up in Phase 1 is strong enough to push us forward through this phase. And we’re still able to keep shipping creative work at a decent pace.

Our deepest doubts and fears start to surface.

“What’s the point, after all?”
“You should probably give up”
“Why not try that other new idea instead? That’s more likely to work”

We start showing up less often. And as a result, we’re unable to consistently ship creative work.

The gaps in our output start to widen. While we could ship almost every day in Phase 1, it’s now challenging to ship even once a week in Phase 3.

Every day now feels like a drag. And thoughts of quitting start to become more frequent.

Phase 4: It’s either a plateau or a steep rise.

The dip is not permanent. If you persist, you’ll eventually come out of it.

Quitting something and moving on to another project isn’t necessarily bad. It’s important to give ourselves permission to quit and move on – if we’re not resonating with the project we’ve taken up.

The important question though is this: If you do decide to quit and move on, in which phase should that happen? Phase 1, 2, 3, or 4?

Most of us would be tempted to quit during phase 3, during the dip. But that’s the wrong time to quit.

While quitting is fine, the reason for quitting is very important. If you quit and moved on, just because it got too difficult, then you’re likely to regret your decision later.

So, when is it okay to quit? In Phase 4, after you’ve come out of the dip.

If by then, you feel you’ve found your calling and your purpose, then congratulations! It’s still going to be a marathon for you, but you’ll enjoy the journey.

However, if you’re feeling unfulfilled at Phase 4, you can now choose to quit. Guilt-free.

By weathering the storm through the dip phase, you’re now more resilient, better informed, and better skilled. You’re now likely to find the resonance you’re looking for in your next project.

Quitting for the right reasons is entirely okay. But don’t give up when the going gets tough. 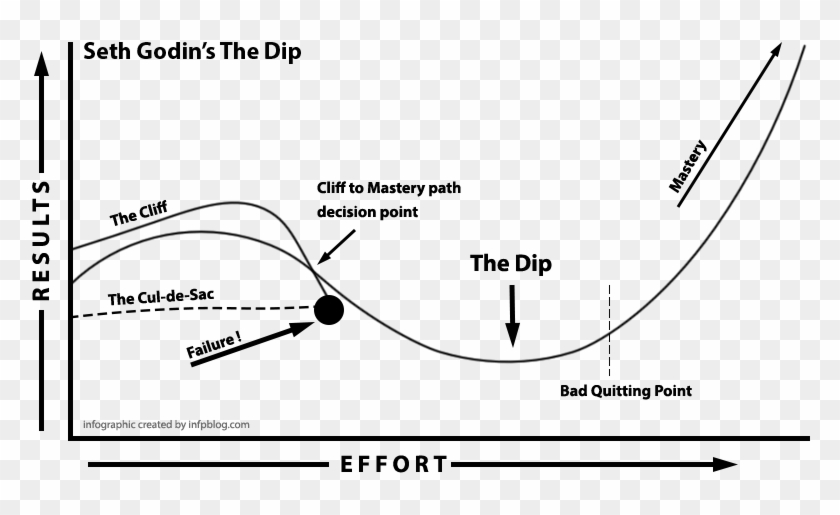 From “The Dip” by Seth Godin

It feels like I’m now in Phase 3 of my writing journey. And I’m definitely not quitting now :).

106 days of Pranayama: How I (almost) conquered anger